Bringing the world into the world; giving time to time:  the arresting phrases belong to Alighero Boetti, subject of a new show at MoMA.  He died at 54 and so we’ll never know where his art would have gone over time.  [It was a brain tumor… so sad.]  But what I saw in NY confirmed my sense of what I had seen earlier that he was a talented thinker.

It’s conceptual art but also has the obsessive edge I value.  Again and again, he plays with words reproduced and arranged at random but with a symmetry that brings order out of chaos or, better yet, plays order against chaos, relishing the tense effect.  Again and again, he finds art where others would not:  in the arrangement of stamps; in graph paper lines reproduced by hand where the errata make their mark; in maps coded by color and national flags in works that are tapestries rather than painting to sculpture.

It’s the genre crossing I like here:  the maps, and (below) woven work, some done during a decade of visiting Afghanistan.  Those carpets must have taken a lot of time and they reproduce bar codes and iPhone scanning.  Those multicolored paintings are really woven fabrics, cut out and assembled collage style.  The found object:  the world.  The arrangement:  the world.  All performed, over time. 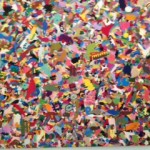 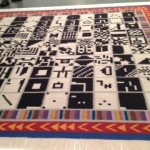 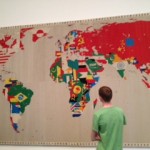