David Chase’s Not Fade Away @NYFF revives the old question: are you a Rolling Stones or Beatles fan?  Filled with nostalgia for 1960s #rockandroll, it follows a young man through the end of high school and into college. In the background, Kennedy is assassinated and Vietnam unrolls. But he and his friends remain fixed on music, music, music.  David Chase denied at the Film Festival that it’s an autobiographical film.  But, like all first films, it’s autobiographical in feeling. In fact, Chase’s wife told him what the character’s girlfriend did:  Time is on your side—as it was.

Creator of The Sopranos, Chase got James Gandolfini and Steve van Zandt in the film—Gandolfini stars and van Zandt did the music. I met him when I auditioned for The Sopranos after a friend recommended me.  I did not get the part but liked Chase anyway. A fun film. Not a great one. But very evocative of the decade. 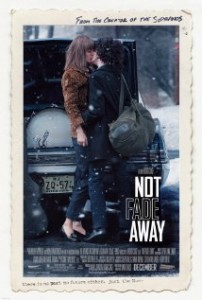