Coney Island 2012 is a different kind of place.

The Boardwalks are low to the ground now, making “under the Boardwalk” a code harder to understand.  The feeling is mellow, almost un-New-York, a feeling amped up when the cool air hits your face on a sweltering day in the City.  All in all, it’s pretty cool in more ways than one.  It doesn’t matter that the Cyclones game is kind of dull when the real live Cyclone is part of the view.  It doesn’t matter that the game goes into extra innings when the fireworks go up on schedule by 10 p.m.

I was born close to the spot I am sitting at the game.  Literally, this is the Return of the Native, Coney Island style.  When we neared the stop in Bensonhurst where I had grown up and waited many a long day and night for the N train, also lovingly called the Sea Beach, with a cruder nickname, the recorded conductor keep saying “we are being held here momentarily.”  After the third time, it began to seem symbolic.  Like the evening.  At Coney Island. 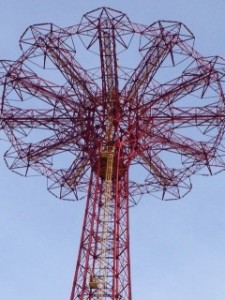 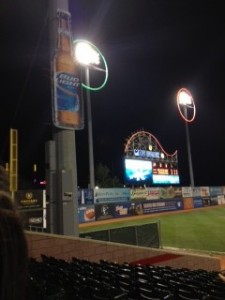